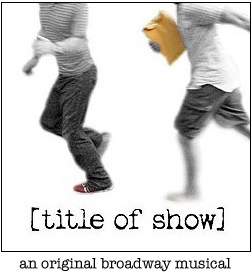 
[title of show] follows 4 friends on their journey of creative self-expression as they write and perform their show,[title of show] at the N.Y. Theatre Festival and learn lessons about themselves as people, friends and artists.  [title of show] is, above all, a love letter to the musical theatre – a uniquely American art form – and to the joy of collaboration.  The musical received a Tony Award nomination for Best Book of a Musical in 2009.


Slathered with wit, imagination and a costume trunk full of inside baseball references, this tiny venture with only four actors, four chairs on a bare stage and an electric keyboard is arguably the most delightful musical comedy ever written by, about and for theater nerds.

This very adult production (laced with so much profanity that the script makes fun of it) features skilled performers whose enthusiasm is infectious: Clay Cartland as the bookwriter, Noah Levine as the composer, Sara Greenberg as an actress trying to balance the project with steady work as an understudy to the ensemble of The Little Mermaid, and Kristina Johnson, as the sassy actress who has nearly given up the life for the soul-sapping but remunerative career as a corporate office manager. All four are winning, but Cartland is especially noticeable for a manic look of Broadway glory in his eyes and scene-stealing bits like making the feral squeal of a Wookie.

The evening is smoothly helmed by director Beverly Blanchette, the former dean of theater at the Dreyfoos School of the Arts in West Palm Beach. Evan Ferrar works double-duty as musical director and the entire band. The show isn’t perfect; neither is the somewhat scruffy production. Notes get dropped; the singers occasionally run roughshod over the intricate musical meters. But the effort is so peppy and lovable that you can forgive it almost anything.


...at Showtime, it is populated with four talented young performers who ingratiate themselves to the audience, getting us to root for their success and the success of the characters they play.

Noah Levine (Jeff) and Clay Cartland (Hunter) play off each other well, finishing each other’s sentences and convincing us that they are best friends. Both negotiate Bowen’s offbeat rhythms and lyrics with seeming ease and are genuinely funny guys. Sara Greenberg and Kristina Johnson play their pals, offering feedback on the show as it takes shape and filling out the cast of the show-within-the-show in support (as the number Secondary Characters attests).

Beverly Blanchette, recently retired dean of theater at the Dreyfoos School of the Arts, stages the show simply, but with knowing attention to details. Showtime is chiefly geared to training and showcasing youngsters, but if it can find unconventional material like this that can fit in its intimate space without many production requirements, the company could become a regular part of the area’s professional theater community.