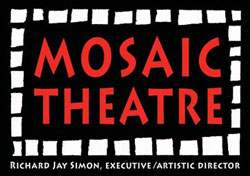 This Monday is particularly dark, as we learn that Mosaic Theater has closed following the last performance of The Birds.  We couldn't find any photos of the their space without a show in progress; and that's appropriate.  That space changed so radically with each new production that it can't be said to have had an existence without a show happening in it.  So we'll just have to make do with their logo.

Artistic Director Richard Jay Simon made the announcement on the company's blog, Tiles.


As I have become older and as I am about to become a father, I wish to improve my quality of life.  My priorities have changed and I have changed.

The Board believes that it was a financially responsible decision to close the theater as I am “the heart and soul” of the organization and without me, it has no chance to move forward.

As someone who as eked out a living in professional theatre, I can sympathize; most artistic directors are overworked and underpaid; as one put it to me many years ago, "I get to pick which 80 hours of the week I work."  Life in professional theater is a life of sacrifice; you will always work longer hours and make less money than your non-artistic peers.  It's a life of rented housing and second-hand cars.

And that's if you're successful.

And this is important to keep in mind; Mosaic isn't closing because it ran short of funding or lost audience support: it closed because its artistic director wanted to spend time.

The Miami Herald reports that Simon didn't make the decision lightly, as he researched his situation:


"...over the past year, without anyone knowing why, I’ve talked to artistic directors about working 42 out of 52 weekends every year. It really came down to quality of life. Ninety-five percent said that after they had children, they wish they’d done things differently.”

Florida Theater Onstage is also covering the story, speaking with Deborah Sherman, who herself closed an artistically successful theater company she founded:


“He wants to have a life. You can’t have a life when you live in a theater 42 weeks out of 52,” she said. “It’s not a matter of not wanting to be creative. It’s a matter of quality of life. When you are responsible not only for the production, but responsible for everyone in that room getting a paycheck so they can eat, it’s a huge weight that puts a lot of strain on you.”

Even Palm Beach ArtsPaper weighed in:


Undoubtedly Simon’s letter will prompt much discussion among the local theater community and perhaps an effort to save Mosaic Theatre. But with Simon intent on making an exit and the board unwilling to consider finding a replacement for him, the future of the popular, much-praised company seems murky at best.

We do wish Richard and his wife, Dyani, the best of luck.  While the loss of Mosaic leaves a huge hole in the South Florida theatre scene, it would have left a larger hole in his family's daily life.

Ironically...
The L.A. Times reports that the financial scene for regional theaters is looking up.


Asked to describe how their organization was doing overall, half of the respondents said they were "holding steady," 40% said they felt they were "on the upswing," and 10% lamented that things were getting worse. Overall, that reflects a slightly improved mood from the 2011 survey, in which 36% said they were upbeat and 11% said they were downcast.

Not COMPLETELY Dark
The Miami Herald reports that the From Scratch Festival is holding readings of new plays by local playwrights at the Deering Estate.  You can also read about it on Soul of Miami.  And BroadwayWorld reminds us that Palm Beach Dramaworks presents the first of this season's Master Playwright Series tonight

Speaking of Playwrights
Fin Kennedy mulls over the ins and outs of being a playwright-in-residence. (It's from April, but we just stumbled across it today, courtesy of Parabasis).

Speaking Of A Tough Business
The Taylor Trash has words of wisdom for aspiring theatre critics (courtesy of Parabasis).

Speaking of Advice
Broadway star Janet Dacal is back in town, appearing in The Last Five Years at Actors' Playhouse.  She has family in the area, and it allows her to visit while still working - because when your career is theater, you always have to work when you can.  But as BroadwayWorld reports, Dacal is also making time to hold a workshop in Little Haiti to share her experience with other South Floridians dreaming of a life on the stage.


This talk back/coaching session will give participants the unique opportunity to talk one-on-one with a Drama Desk Award-winning leading lady about her journey to Broadway. Attendees will have the chance to ask questions, hear backstage stories and learn some of the tricks of the trade. After the talk back session, participants are asked to come prepared with a headshot, resume and song of their choice, as Janet will coach them through their material.

It's an excellent opportunity to learn about show business from an honest-to-god Broadway star.
Posted by C.L.J.