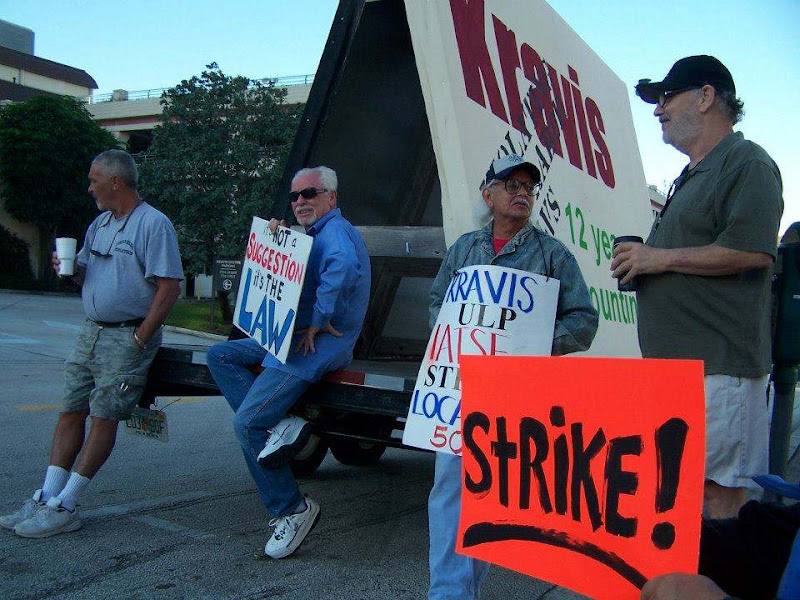 If you're one of the thousands of South Floridians who had been planning on attending Jersey Boys at its stop at the Kravis Center, you're probably wondering why they had to cancel the show, as announced in the Palm Beach Post.

Just so we're all crystal clear on this, it's all the Kravis Center's fault.  Twelve years ago, Kravis Center management violated the contract they had with the stagehand's union, IATSE Local 500.  There was no cause, there were no negotiations that broke down, management simply broke their contract and locked out their crew. 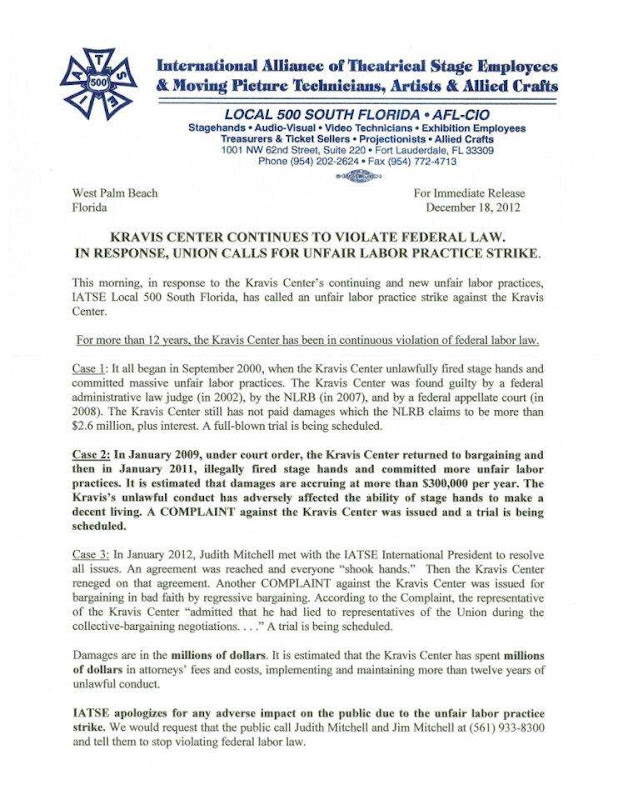 The bottom line is that the Kravis Center is absolutely in the wrong here; they broke the law, and have continuously thumbed their noses at the rulings of the district court, the NRLB, and the appellate court.

And the Kravis Center's arrogant and frankly stupid decision is harming other businesses in the neighborhood:

"I have a newborn baby on the way that's due in May," said Fisher. "Tips are a big part of my paycheck."

The restaurant is finding out what life is like without 2,200 people who want dinner before an 8 o'clock curtain.
--WPTV

This strike was completely avoidable; all Kravis Center had to do was accept that they are in the wrong, and follow the directive of the courts.  They've had twelve years to resolve this, but instead took every opportunity to savage their relationship with an organization that should be their partner.

So of course the union is picketing the show; Jersey Boys is a cash machine, and every day the show isn't performing, Kravis Center is losing hundreds of thousands of dollars on top of the $2.6 million dollars they are going to eventually have to hand over to the stagehands.  Eventually, one of the Broadway tours was going to come in, and refuse to cross the picket of their Union brothers and sisters.  The biggest and best Broadway tours all use IATSE labor; it's
inconceivable that any competent manager could believe that this wasn't
going to be a problem at some point.

Kravis Center recklessly pursued a path destined to fail, and their patrons and business partners are paying the price for their foolish arrogance.  So if you feel like you've been screwed, it's Kravis Center what done it; call them and complain.

In the meantime, Sister Act is just down the road at the Broward Center for the Performing Arts,  it's a lively show with plenty of good seats left; and they have an excellent partnership with the union.
Posted by C.L.J.