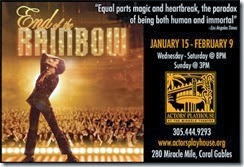 Actors’ Playhouse opened its production of End of the Rainbow at the Miracle Theater on January 15, 2014.

It's December 1968 and Judy Garland is about to make her triumphant comeback...again. This savagely funny drama offers unique insight into the inner conflict that inspired and consumed one of the most beloved figures in American popular culture. This powerful new play also features over a half dozen of Judy's signature songs performed live on stage. End Of The Rainbow was a huge hit in London's West End, and on Broadway just last season, and features an evening of explosive acting, classic songs, and fierce emotion.

Actors’ artistic director David Arisco has given South Florida a fresh production of the play, though the look of it is highly influenced by the one that played Broadway. That’s not a knock on set designer Tim Bennett, lighting designer Luke Klingberg or costume designer Ellis Tillman, whose work captures Garland’s late-’60s style; it’s just an observation.

Channeling Garland’s upper-fueled energy, St. George almost dances around the stage, nearly ricocheting off the furniture. She strikes Garland-style poses and tries to incorporate some facets of the star’s distinctive voice in her speech and strong singing, but truth be told, she doesn’t sound much like Garland.

As the dozen-years-younger Deans, Laurino gives as good as he gets when Garland lets the f-bombs fly, and his convincingly played exploitative actions help make Anthony’s case that Deans sees his wife-to-be as little more than a meal ticket.

But McPhillamy’s work, as is so often the case, is adroit and lovely. His Anthony is a gentle, vulnerable, observant soul, spot-on with a quip but never cruel.

Actors Playhouse’s production of Peter Quilter’s script is shot through with witty gallows humor and compassion for a wounded soul. Most of all, it has a marvel-inducing tour-de-force by Kathy St. George under David Arisco’s direction

Even with renditions of Garland’s signature tunes and reproducing the icon’s mannerisms, St. George doesn’t convincingly channel Garland. But St. George’s portrayal of someone resembling Garland in Garland’s dramatic circumstances remains engrossing from an entertainment standpoint, touching from a dramatic standpoint and fascinating from a voyeuristic train wreck standpoint, all on its own terms.

In New York, Quilter’s script seemed unexceptional and the direction there didn’t help it much at all. But Arisco has managed to make the scenes work far more effectively. Poor Michael Laurino has the thankless two-dimensional role of Deans, but he manages to make Deans seem more genuinely concerned about Garland as a person…

The always wonderful Colin McPhillamy fares far better as Anthony who is quite comfortable with his homosexuality in 1968. His empathetic pain for Garland is palpable, especially when he begs her to run away from this fatal trap and set up a sexless marriage with him in an anonymous small town life on the coast. This role, too, failed on Broadway despite the work of dependable veteran Michael Cumpsty, so McPhillamy deserves credit for making it land just right.

…End of the Rainbow is a straightforward drama tinged with acrid comedy. Three characters love, argue, and piss down one another's legs in an increasingly trashed hotel room that's never big enough for Garland's ego.

David Arisco's direction successfully brings out the best and worst in all three central characters — not one is demonized, even when their decisions are misguided and self-serving. Moreover, he creates at atmosphere of immersive realism, effectively rendering Quilter's script invisible; in the hands of Arisco and his remarkable cast, the dialogue never sounds written. Every outburst or gesture has the truthful resonance of spontaneity.

As Mickey, Laurino — in addition to looking the part of a '60s nightclub owner, with his sideburns and shag of tousled hair — delivers an intuitive performance, seemingly free of studied calculation.

McPhillamy, meanwhile, is an absolute charm, portraying the play's most kind-hearted, likable character as a veritable godsend. He's also unself-consciously funny and, when he needs to be, tragically distraught.

Saving the most tornadic for last, Kathy St. George achieves the feat of disappearing utterly into her cultural icon. Her looks, her age, her voice, even her height mirror Garland's circa 1968. It's no surprise she won wide acclaim for her title role in a similar show, And Now Ladies and Gentlemen, Miss Judy Garland, a few years ago.

As is to be expected with Actors’ Playhouse, the production values are extremely high. The set by Tim Bennett is beautifully designed and executed. The costumes by Ellis Tillman are perfect late ’60s period. The musical direction by David Nagy is excellent and the band is a well put together ensemble. Director David Arisco led a very talented cast through accurate portrayals of real people.

Kathy St. George gives a tour de force performance as Judy Garland. She has nailed the mannerisms, speaking voice and singing voice of the legendary entertainer so that at times you do believe that it might possibly be Judy Garland up on stage.

Colin McPhillamy plays one of Garland’s show pianists. As the gay Scotsman who is obviously in love with Garland in his own way and genuinely cares for her, he gives a moving and emotional performance.

The Actors’ Playhouse production of End of the Rainbow plays at the Miracle Theater through February 9, 2014.