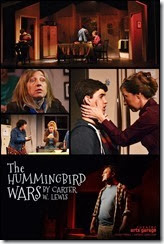 The Theatre at Arts Garage opened its production of Carter W. Lewis’ The Hummingbird Wars on January 10, 2014.

When a soldier returns home from war in Afghanistan to the expected safety and security of his home and family, only to discover that his homefront has become the new battlefront, we experience a clear picture of today’s siege on the American middle-class.

Whether being laid off or downsized, whether losing your health insurance or being gouged by the coverage that you thought would cover but doesn’t, whether being kept on hold, or being passed from automated voice to automated voice when trying to reach the mortgage company, the electric company, the water company, the cable company… These experiences that all of us know too well have steadily grown from comic annoyance to what feels like a very real threat to our way of life.

You think you’ve got troubles? The extended Everyman family in Carter W. Lewis’ jet black satire The Hummingbird Wars is struggling with more woes than the entire roster of ten plagues that afflicted Egypt. The world premiere at Theatre at Arts Garage is hysterically funny but unnervingly upsetting because the depiction of a society disintegrating around and under you is too damn recognizable to allow unimpeded belly laughs.

Carter, director Greg Johnson and the totally committed cast force the audience to face up to the terror that we keep tamped down inside that we are impotent to stop the world going to hell in a handbasket.

Johnson has a skilled cast of comic actors to work with, starting with Todd Allen Durkin as the war hero father with PTSD who only leaves the house to stand outside and peer in the window. He is wonderfully woebegone as he tries to deal with the Whack-a-Mole of problems. Durkin does so much with just a look…

Jeni Hacker at first seems as normal as any driven career woman, but she creates an upward spiral of angst as her impotence to affect the world circles the drain.  Andrew Griner Jr. is a convincingly oddball teenager, perhaps brighter than everyone else in the house, but who is watching his family slip down the rabbit hole. Gretchen Porro… and Joline Mujica… make a hilariously cooing couple. Kelli Mohrbacher isn’t seen, but her amiable voice is unnervingly seductive as a customer service agent on the telephone who hits on Kate, armed with very personal information she shouldn’t know.

If you’ve ever felt like a polar bear on an ice floe melting to nothing thanks to global warming, The Hummingbird Wars will resonate.

Playwright Carter Lewis uses a light touch to address heavy issues. In… past works… he has gathered current social ills and shaped his observations about them into entertaining, and often challenging, theater.

Certainly that is the case with his latest play, The Hummingbird Wars, a world premiere at The Theatre at Arts Garage. As expressed in Lewis’s hyper-articulate voice, his characters experience a barrage of contemporary woes in a highly theatrical atmosphere that is well worth letting wash over you, even if Lewis seems to be in his most downbeat mood about the zeitgeist.

Todd Allen Durkin, South Florida’s resident schlubby Everyman, heads the cast as Warren, back home and out of uniform, but still being bombarded by life. Jeni Hacker, taking a breather from her usual musical roles, embodies stressed-out Mel well, down to the worry bags under her eyes. Lewis often takes the risk of writing parts for young actors, believing that the right actors will somehow turn up. He, and director Greg Johnson of Montana Repertory Theatre, are fortunate to have the services of Andrew Griner Jr., Gretchen Porro and Joline Mujica.

The Hummingbird Wars is a pessimistic play, but Lewis serves its dark message with more than a little humor. The Theatre at Arts Garage has grown more adept at fitting increasingly complex designs on its informal stage, notably Michael Amico’s cookie-cutter home setting and David Nail’s lighting, complete with a terrific lightning storm. Lewis’s plays continue to be full of ideas worth gnawing on, and artistic director Lou Tyrrell seems content to keep championing his work.

Few plays in recent memory have felt more plugged in to the zeitgeist than Carter W. Lewis’ “The Hummingbird Wars.” The play’s underlying themes resonate even deeper: In this surreal study of a nuclear family’s implosion, loaded firearms sprout on and around the furniture like weeds, invariably winding up in the backpack of the family’s teenage son.

Taken together—along with the onrush of water that, slowly but surely, seeps through the cracked walls of the house, thanks to a break in a pipe—“The Hummingbird Wars” offers a withering satire on 21st century malaise that feels ripped from tomorrow’s headline

So why does this arrestingly relevant piece of theater feel so lackluster in its current incarnation at Arts Garage? That’s the complicated question I’m still sorting through, as I continue pick through the rubble of this missed opportunity.

A good part of the problem lands on Lewis’ feet. Grand concepts still need to get the minutiae right, and even before the play’s accelerating weirdness takes over, his characters’ exchanges just don’t ring true.

But fault lies equally with director Greg Johnson and his cast, who fail to elevate Carter’s source material to any satiric zenith it deserves. This show is supposed to funny, and by and large it isn't. Griner is stilted and awkward as Pete; it’s enough, apparently, that he memorized his lines, and his performance is all rote recitation with zero emotional connection. Everybody else is at least capable; Mujica delivers her share of lines with more enthusiasm, but her character’s sense of humor never translates. Durkin, whose experience in this community raises his standard of expectation higher than his colleagues, merely goes through the motions. His boredom is palpable, and he feels as marooned onstage as his shell-shocked character is in his backyard, where he frequently wanders in a zombified stupor.

Only Porro seems to be fully engaged with this material, and therefore it is only her character’s story—she’s either paranoid or a victim of an encroaching surveillance state—that resonates deeply.

The best that can be said for the Theatre at Arts’ Garage’s “Hummingbird Wars” is that its technical elements are top-notch, from the glow of crepuscular light through the kitchen window (fine work from lighting designer David Nail) to the rumble of apocalyptic thunder, the running water and the bowel-shaking gunshots, courtesy sound designer Michael Kelly.

The Hummingbird Wars plays at The Theatre at Arts Garagethrough February 2, 2014.