The Plaza Theatre: My Life On A Diet (reviews) 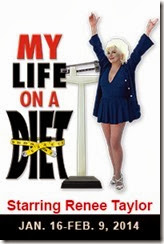 The Plaza Theatre opened Renee Taylor’s My Life On A Diet on January 16, 2014.

Starring Renée Taylor – Broadway & Hollywood Star, best known as Fran Drescher’s Mom on The Nanny. Based on her best-selling book My Life On A Diet: Confessions Of A Hollywood Diet Junkie, this hilarious show examines how Renee’s ability to laugh at situations, at others, and at herself, got her through the rough times of her life, and includes the personal weight loss programs of dozens of stars. Get ready for some juicy gossip, dishing, and lots of laughs.

Renee Taylor was directed by her husband, Joe Bologna.

There are obstacles that don’t make My Life on a Diet as delicious as it could be as a theater piece. The main drawback is that Taylor sits behind a desk for 90 minutes... She reads from the script perched on a small tabletop lectern and kept together in a 3-ring spiral notebook with the pages tucked into laminated dividers. It’s unobtrusive, but definitely there. Taylor, who will be 81 in March, knows the story (it’s a look back at her own 60-year showbiz career), but the printed word is relied upon about 80 percent of the time.

Taylor has a natural humor and weaves fantastic yarns about falling into enviable jobs on television with Jack Parr and on stage as a comedian at the New York City nightclub Bon Soir in the early 1960s, where she opened for a then unknown Barbra Streisand. She even had a movie part with Jerry Lewis.

There’s a point in the show where everything about My Life on a Diet becomes clear. The audience acts as therapist — the stage, the psychiatrist’s couch. When Taylor has her catharsis, she’s drawn the audience in like a famous relative sharing stories around a dining table. “Food and fame. These were my addictions,” she readily admits.

And who can’t relate to that?

Taylor is an inherently funny woman, so who wouldn’t want to spend an hour-and-a-half or so in her presence? That is the attraction of My Life on a Diet, her amusing memoir-cum-diet advice tract. Not much theatrical happens, but that does not prevent the evening from being entertaining.

My Life on a Diet is also the title of a book of reminiscences that Taylor wrote with the assistance of her longtime collaborator and husband, Joseph Bologna, three decades ago. The show is simply Taylor sitting at a desk, reading that book, or at least a slightly edited version of that clever tome.

The recitation is full of name-dropping anecdotes and delicious tales of Taylor’s lifelong struggle with her weight. They are enjoyable to hear, but she has been performing this show, off and on, for the past year. Couldn’t she have taken the time to memorize some of it?

Like Kevin Bacon, it seems that few show business icons did not come in contact with Taylor. Marilyn Monroe. Barbra Streisand. Grace Kelly. Jerry Lewis. Joan Crawford. And of course, Fran Drescher. She’s got an anecdote about each one and they’re all amusing.

If you stop and think about it too long, nothing about “My Life on a Diet,” through Feb. 9 at Manalapan’s Plaza Theatre, should work.

The one-woman show with Renee Taylor — who famously starred as Fran Drescher’s always-noshing mother on the 1990s sitcom “The Nanny” — is more like one of those entertainments booked for a corporate convention or maybe a Caribbean cruise. The theatrical factor is almost nonexistent. The staging is simply Taylor reading her script from a desk at stage right as images are projected onto a screen at center stage. That’s it.

Taylor doesn’t even summon forth many vocal dynamics in her reading, opting instead for the aural equivalent of a spoken lullaby. Again, it really shouldn’t work.

But it does. Taylor is a funny lady and an impressive name dropper. For 75 minutes with no intermission, she weaveMarilyn Monroe, Marlon Brando, Barbra Streisand, Steve McQueen, Jane Fonda, Cary Grant, Betty Grable, Lenny Bruce, Jerry Lewis, Joan Crawford, Grace Kelly, Jack Paars and Perry Como into her narrative, in which everything — and I mean every single thing — is centered on Taylor’s quest for the perfect diet.

But the show would fall apart, crumble into pieces, if not for that screen. The projections — including the makeup of her diets, a few videos from her 60-plus-year career and photos of her famous friends — give punch to her punch lines. Without them, she is simply reading from the 1987 book that inspired the stage show. Even with her gift for gab, comic timing and Bronx accent, Taylor would probably face an uphill battle to get as many laughs as she does without it

My Life On A Diet plays at The Plaza Theatre through February 9, 2014.