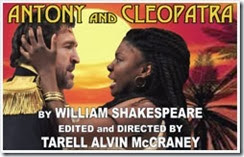 GableStage opened its co-production of  Tarell Alvin McCraney’s adaptation of Shakespeare’s Anthony and Cleopatra at the Colony Theater on January 10, 2014.

GableStage is collaborating with two of the world's most prestigious theaters – The Public in NYC and the Royal Shakespeare Company in the UK – on what promises to be one of the most exciting cultural events in our city's history! Adapted and directed by Miami's own award-winning playwright, Tarell Alvin McCraney, the production is set on the eve of the Haitian Revolution against the French. It will open at Stratford-upon-Avon and then transfer to Miami Beach – where our audiences will see it at the COLONY THEATRE on Lincoln Road – before it moves to The Public in New York.

…anyone who comes prepared to this Antony and Cleopatra… who surrenders to its fast-paced, impressively acted story, will be rewarded. The play is yet another reminder of Shakespeare’s timelessness and his deep understanding of human nature. Unsurprisingly, given the budget, companies and talents involved, this is also a Shakespearean production of a quality seldom seen in South Florida.

As the play’s tempestuous lovers, Jonathan Cake and Joaquina Kalukango thoroughly suggest that the conquering warrior and his capricious queen are passionately addicted to each other.

Chukwudi Iwuji is both stirring character and enlightening narrator, helping the audience navigate the shifts in action between Egypt and Rome (or Haiti and France)…

McCraney, a recent MacArthur “genius grant” winner, has spoken often of his love of Shakespeare and his determination to share that love with hometown Miami audiences... With his bold, action-packed production at the Colony, he is sharing his passion in a way that enriches theater in South Florida.

Instead, McCraney’s choice ensures that an exotic vitality vibrates through this landmark co-production of GableStage, the Royal Shakespeare Company and the Public Theater, exciting the imagination with a visceral rather than cerebral approach.

McCraney… was asked by the RSC to do a “radical edit” of the play. With an eye to bringing the show to the multi-cultural Miami, he explored the analog between the periods: imperialistic entitled Rome and upstart hedonistic Egypt, comparing it with colonial France in the 1790s as it occupied Haiti a few years before its revolution. The vision of a Napoleonic officer in his tunic adorned by epaulets colliding with a chocolate-skinned beauty in flowing white robes feels valid enough not to be distracting, if not an essential interpretation.

Kalukango creates such a vibrant, engaging lifeforce that it’s not hard to see why Antony is attracted to her.

Cake has Antony, the man of action, seem to search for the right words to express himself as he discovers he is neither infallible nor invulnerable.

The rest of the cast is uniformly solid, but especially notable is Samuel Collings’ Octavius Caesar, the politician always one step removed from everything so he can assesses the most deft move; and Chukwudi Iwuji as the wryly intelligent observer Enobarbus.

It may be unfair, but one is judged by the company one keeps, and GableStage is currently in very good company. Long a booster of Miami-raised playwright-director Tarell Alvin McCraney, the Coral Gables theater is currently presenting this hot property’s latest audacious venture, his adaptation of Shakespeare’s Antony and Cleopatra.

…the production’s chief asset is the story clarity rendered by the well-spoken, classically trained actors. Primary among them is Brit Jonathan Cake as Mark Antony, the noble Roman warrior reduced to a fool for love over the exotic, seductive queen Cleopatra. She is played by Joaquina Kalukango, a Juilliard-schooled American actress who assumes a thick Creole-tinged accent. Some of her cadences seem to fight with Shakespeare’s poetry, but Kalukango manages to overcome such problems, projecting a regal command that almost transcends language.

The Haitian flavor is evident in a group of island musicians elevated on Tom Piper’s space, elegant, but evocative set and in the occasional injection of voodoo within the Egyptian arsenal. Overall, the pluses and minuses of the cultural transfer seem about a wash.

…this is easily some of the best, most elegant and hot-blooded Shakespeare seen in South Florida in many years.

…you should go to see this piece. The acting, with a couple of exceptions, is excellent, as is the staging.

….just enjoy the good things in this powerful show. It's easy, with Jonathan Cake as a hearty, charming Antony and Samuel Collings as the sly Octavius Caesar. Both are terrific. All of the men are standouts, particularly Chukwudi Iwuji as Enorbarbus and and Chivas Michael in his three roles.  But unfortunately that is not true of the two women in the cast. Charise Castro Smith as Antony's Roman bride and as Iras, Cleopatra's attendant is, well, ordinary. Joaquina Kalukango as Cleopatra is hard to understand and exudes such little sex appeal and royal bearing that Antony's infatuation is certainly suspect.

Mounted at the Colony Theatre and coproduced by GableStage, Stratford-upon-Avon's Royal Shakespeare Company, and New York's Public Theatre, McCraney's take on the other star-crossed lovers sidesteps many of the problems associated with presenting Antony in decades past.

…McCraney's decision to have it both ways — to suggest Haiti while otherwise remaining faithful to Shakespeare's historical period — is one of his few experiments that isn't fully realized.

But otherwise, his decision to suture his personality into Shakespeare's is more than welcome, helping revive an ancient text for the modern, moviegoing sensibility.

McCraney couldn't have corralled a more peerless ensemble of international actors to translate his idiosyncrasies. Across the board, this ensemble's mastery of Shakespearean dialogue, combined with the propensity for modern-day body language, is a lesson in craft.

Of the supporting players in this cast of ten… I was taken with Henry Stram as Proculeius, a messenger to the volcanic Cleopatra whose reports on Antony's affairs in Rome are delivered with fear and trembling. Cheeks crimson, lips aquiver, he's the picture of milquetoast trepidation in the presence of an unpredictable monarch. Chivas Michael draws heartbreaking pathos from his trio of roles, especially in the part of Eros, Antony's effeminate servant turned would-be assassin, harrowingly changing his register from fey to steely. And as Antony's BFF — and the play's occasional narrator — Enobarbus, Chukwudi Iwuji is the production's unsung hero, anchoring the action when emotions roil and spittle flies.

As for the title characters, it doesn't get much better than the contributions from Jonathan Cake and Joaquina Kalukango... Kalukango brings a wry self-awareness to the part, elevating Cleopatra's mercurial whims to high comedy. She's an actress playing an actress, and she knows it and owns it. Cake plays his part as a keg-tapping dervish of outsize passion and sexual proclivity, perhaps closer to the mythical Dionysius than the historical Antony.

Antony and Cleopatra's bond is a fractious one, and Kalukango and Cake play up their relationship like the sort of couple that shouldn't be together, except the sex is so hot. They are oil and water that sometimes mix, and when they do, the chemistry is palpable.

...when Antony's initial self-inflicted sword thrust fails to strike him dead, McCraney and Cake find humor in the result, a moment of Mel Brooks-esque farce at the apex of Shakespeare's tragedy. Decisions such as that one help to not only resuscitate a play most companies wouldn't attempt, but also replace it with a strange and fascinating new heart.

GableStage presents Anthony and Cleopatra at The Colony Theater through February 9, 2014.