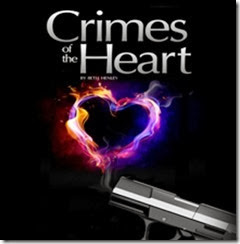 The Broward Stage Door Theatre opened its production of Beth Henley’s Crimes of the Heart on January 17, 2014.

At the core of the tragic comedy are the three MaGrath sisters, Meg, Babe, and Lenny, who reunite at Old Granddaddy's home in Hazlehurst, Mississippi after Babe shoots her abusive husband. Winner of the Tony Award, the Drama Circle Award, and the Pulitzer Prize, "Crimes of the Heart " is considered one of the finest plays in the American Theatre.

Crimes of the Heart is well acted, amusing and, when it should be, touching. The new production has been staged by Michael Leeds, who directs it with insight and grace, drawing effective performances from all six actors.

On its surface, Crimes of the Heart seems to be a comic study of the eccentric characters in a dysfunctional family. But though it’s no Streetcar Named Desire or Long Day’s Journey into Night, it did win the Pulitzer, and its deeper themes — relentless self-absorption, casual cruelty and abuse, the loneliness of the loveless — make spending a couple of hours with the Magrath sisters a richer experience.

The past is too much with us, to misquote Wordsworth. Beth Henley’s Crimes of the Heart urges us to get past our pasts if we are to have some hope for the future.  That homespun homily is delivered with endearing warmth in Broward Stage Door’s production of this 1979-80 comedy performed by a competent cast under Michael Leeds’ sure direction.

The actors are serviceable, but once again it’s Leeds’ solid leadership that shines. He subtly moves his players around the MaGrath kitchen to keep the play feeling fluid. He adds or allows scores of understated bits of business that may or may not land in the audience’s consciousness but which unconsciously give the production a filled out feeling.

Ursula Anderman makes the most of the best-written role as Babe, an other-worldly former debutante whose emotional reaction to everything around her is a walking non sequitur.

Meredith Bartmon inhabits the love-starved Lenny beautifully, creating a lonely woman who has tragically accepted being taken for granted. But when her sisters empower her, she blossoms like a springtime sprout coming out of the hard winter ground.

Faiza Cherie makes a fine red-haired Meg driven by self-destructive demons whispering in her ear. Clearly loyal to her sisters, Cherie’s Meg regularly hurts people around her with her self-centered and thoughtless choices. But Cherie, Leeds and Henley manage to makes audiences care about her, seeing her external behavior as a product of her inner turmoil.

Crimes of the Heart plays at the Broward Stage Door Theatre through February 23, 2014.