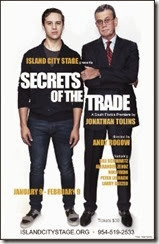 Island City Stage opened its production of Secrets of the Trade at Empire Stage on January 9, 2014.

A smart, ambitious kid from Long Island dreams of a career on Broadway and hopes that his idol, a theater legend, can give it to him.  Will a door to success be opened for him, or will their complicated relationship force him to question a life in the theater?

Both a coming-of-age and a coming-out play, Secrets of the Trade is getting its South Florida debut in an Island City Stage production at Fort Lauderdale’s Empire Stage. That Tolins’ 2008 blending of comedy and drama resonates with many in the attentive audience is obvious: Clearly, the decade-long journey of the play’s key character stirs memories both pleasant and painful. But the truths contained in Tolins’ script don’t erase the play’s flaws.

Director Andy Rogow made a smart casting decision in giving the rather maddening role of Kerner to Schwartz. The actor infuses the character with an urbane charm, and he keeps Kerner’s motives just questionable enough that the older man’s periodic interest in Andy isn’t as simple as it first seems.

Zenoz, a young actor just beginning his professional career, believably ages from a kid just three years beyond his Bar Mitzvah to a Harvard student in the throes of first love to a writer giving a different medium a try. But he doesn’t yet have the charisma or skill to overcome the way Tolins paints Andy as a once-happy kid who angrily rejects his parents, in life and in art. Zenoz’s Andy comes off as spoiled, miserably irrational and tough to cheer on.

Director Andy Rogow slyly keeps the mist hanging around the characters’ motivations, which are not simple or straightforward. Does Martin simply want to mentor Andy? Or does he have something more prurient in mind? Is this a wacky, wonderful and whimsical laugh-riot or a brutal, badass, backstage melodrama?

Librach and Fridh… pull double-duty in quick-but-sharp bit parts, playing a waiter and an agent, respectively. There is some sharp acting going on here. Zenoz has a nice, slacker-like grip on Andy’s slightly neotenous nature, taking him from puppy-dog enthusiasm to something approaching old-dog savvy in a believable manner. The acting is a subtle art with him, full of tiny calibrations.

The production has an array of moderate strengths and moderate weaknesses, but the second act is more satisfying because Tolins delves deeper than the obvious set ups of the first act.

The capable cast is surprisingly good, although poor Alexander Zenoz is saddled with a full first act of playing this immature groupie. Only as Andy matures a bit in the second act — still needy, still obnoxious to his parents, still “nobody understands me” – only then does Zenoz get to show a bit of range. But that’s what Tolins wrote and what Rogow respects.

More interesting is Bill Schwartz’s Kerner, totally committing to his character’s self-centeredness, the posturing, the carefully-masked fragile ego. And yet, Schwartz makes it clear that this flawed human being is quite aware of his shortcomings, quite aware that he is feeding off Andy’s idolatry, and actually cares about Andy’s maturation – so long as Kerner doesn’t have to put himself out.

Island City Stage’s production of Secrets of the Trade plays at Empire Stage through February 9, 2014.