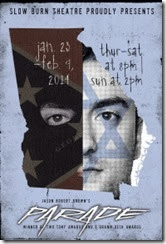 The tragic, true story of the trial and lynching of a man wrongly accused of murder is brought to emotional and theatrical life by acclaimed playwright Alfred Uhry (DRIVING MISS DAISY) and Jason Robert Brown, one of Broadway’s most promising young composers (SONGS FOR A NEW WORLD). Daring, innovative and bold, PARADE won well-earned Tony Awards for Best Book and Best Score in 2000. Its subject matter offers a moral lesson about the dangers of prejudice and ignorance that should not be forgotten.

Courageous. Even if Slow Burn Theatre Company’s moving production of the dark and dangerous musical Parade wasn’t the success that it indeed is, the troupe would deserve honor for the fearlessness in choosing a pre-ordained tragedy about anti-Semitism that mixes soaring melodies with discomforting dissonance.
But this company specializing in large-scale thought-provoking musicals that few others attempt has again delivered an enviable piece of theater that challenges the audience as well as its artists.

Patrick Fitzwater, Slow Burn’s co-artistic director, has once again wrung affecting acting performances from his troupe while staging it with a choreographer’s bent for stylistic movement and tableaus. Much of the show moves so fluidly from one scene to the next that the engrossed audience cannot shake being dumbstruck long enough to applaud individual numbers.

Tom Anello masterfully creates the spiky and not terribly likeable workaholic Leo who keeps life and his wife at arm’s length… Anello’s withdrawn restrained Leo is the perfect depiction of someone who does not and cannot fit in, assuming he would want to, which he doesn’t.

But in a cast of strong voices, Ann Marie Olson is in a class by herself as his wife, Lucille, blessed with one of most glorious mezzo-sopranos in South Florida theater… As an actress, she bravely embraces Lucille’s disappointment that Leo has not been everything she hoped for in a husband. That disconnect is exemplified in that they have little overt chemistry for the first half of the show, which is as it should be.

The revised scale of this version has many of the 16 actors doubling and tripling in parts. This not only shows off their versatility but underscores the unabashed theatricality of the piece. Particularly intriguing is having Christian Vandepas play the conscienceless yellow journalist and then the governor whose conscience is awakened to take a politically suicidal stand in commuting Frank’s official death sentence and reexamining the case.

Several others have standout solos including Jerel Brown as treacherous janitor Jim Conley… Kaitlyn O’Neill is the grieving mother on the witness stand delivering the heart-rending song, “My Child Will Forgive Me.”

Some of the cast’s success with the score is due to the oversight of musical director Manny Schvartzman. He led the solid live band…

Something indefinable about the entire production isn’t quite perfect, but the cast and creative staff is so passionately committed to it and the raw material is so strong that it’s like watching the snowball roll down the mountain until it becomes a deadly avalanche.

It is not just that Slow Burn Theatre Co. keeps taking risks with its dark, unconventional musical choices, but the scrappy West Boca troupe continues to deliver on its offbeat selections with high-impact, powerful productions.

Olson in particular has a powerful singing voice, as heard previously playing the Beggar Woman in Slow Burn’s Sweeney Todd. Anello bears a striking resemblance to Woody Allen, in both appearance and mannerisms, which serves to underline his character’s New York Jewish roots. He too is quite musical, managing the complexities of Brown’s score as the innocent man grows increasingly frantic.

Director-choreographer Patrick Fitzwater does his usual fine job molding the 16-member cast into an organic ensemble. Still, there are standouts among the supporting players, including Matthew Korinko as the politically ambitious prosecuting attorney, Kaela Antolino as the doomed 13-year-old Mary Phagan and Kaitlyn O’Neill as the girl’s mother.

It is probably worthwhile to keep in mind how Slow Burn manages to do such impressive work with such limited resources. But even with that aside, Parade is as good as any musical production you are likely to find among South Florida’s resident companies.

Richard Cameron wrote for The Examiner:

Making her mark as a Florida leading lady is Ann Marie Olson (Lucille Frank). Ann Marie's voice is strong, glorious with acting chops to match. Ann Marie has been seen in countless South Florida productions, but she really gets to shine in this role. Her husband played by Tom Anello (Leo Frank) also has a beautiful voice. Tom's accent and physicality match that of a stunned convicted criminal. The sets by Sean McClelland are spacious and multi leveled, creating various locations with ease. "What everyone loves about Slow Burn Theatre is they don't need a new ten million dollar venue to create magic. The lights with hazers, glorious sound, sets and live band, all keep them on the top of award winning list."

Patrick Fitzwater proves once again that he can direct and choreograph any Broadway musical. Musical Direction by Manny Schvartzman is heartwarming, living up to magic of Music and Lyrics by Jason Robert Brown and book by Alfred Uhry.


... the cast and seven-piece band adeptly negotiate Jason Robert Brown’s score of pop-rock, ragtime, gospel and R&B, despite the near-constant shifting rhythms and sliding tones. At times, the cast sings with raw emotion. If our reaction is somewhat cool to the book by Alfred Uhry (“Driving Miss Daisy”), then that is all on us. “Parade” is a good show that is good for you.

Helmed by Patrick Fitzwater, the production is so seamless that applause sputters to life late between scenes and after songs. This is partly because we are numb while trying to digest the preceding action, and partly because of the fluid transitions