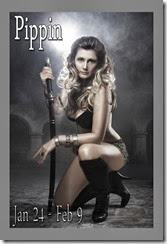 The Boca Raton Theatre Guild opened its production of Pippin at the Willow Theatre on January 24, 2014.

According to musical theatre scholar Scott Miller in his 1996 book, From Assassins to West Side Story, Pippin is a largely under-appreciated musical with a great deal more substance to it than many people realize…
Currently enjoying an extremely successful revival on Broadway, Pippin uses the premise of a mysterious performance troupe, led by a Leading Player, to tell the story of a young prince and his search for meaning and significance.

BRTG’s edition of many Boomers’ favorite musical boasts standout and satisfying performances by Reggie Whitehead as the sinuous, sardonic leading player, Mike Westrich as the titular hero seeking meaning in his life and Patti Gardner in one (or is it two) vibrant roles that elevate the bar anytime she’s on stage.

Some physical aspects aren’t in the same praiseworthy category as Ron Hutchins’ lively choreography or Paul Reekie’s deft musical direction. But director Keith Garsson has produced an enjoyable rendition of the 1972 Stephen Schwartz/Bob Fosse hit that is currently enjoying a reimagined circus-infused revival from director Diane Paulus on Broadway.

The choreography by Hutchins (just off the Wick’s 42nd Street) retained a bit of the Fosse flavor – the classic vocabulary of bent arms, jazz hands etc. – but most of it was his design and he reaffirmed his position as one of the region’s most talented hands.

…three-time Carbonell winner Whitehead once again delivered polished assured dancing melded with a gleaming grin and a deliciously jaded singing voice of a charismatic narrator who has seen it all… If he and Hutchins are channeling their spin on the original steps and vibes of Ben Vereen and Fosse, so what?  Sit back and savor it.

Westrich has been steadily making a reputation in dramas..  and musicals... His strong clear voice and his sincerity are essential to keep the hero from distancing himself from the audience because Pippin is frequently a selfish callow fool. Instead, Westrich plugs into the yearning that every emerging adult during the past 6,000 years has felt for finding their special role in the world…

Even after watching Gardner for nearly 20 years now, it’s still difficult to analyze how she does what she does. Few of her characterizations in dramas, comedies or musicals seem cut from the same cloth...  Here she creates Queen Fastrada, one of the most conniving and sexiest stepmothers in any Broadway musical.

…the supporting cast is laudable as well. Leah Sessa doesn’t make a solo entrance until the second act as Catherine... But she instantly earns her spotlight with a droll, knowing, irresistibly lovely persona – not to mention an even lovelier voice. Troy Stanley is a massive looming presence with a sonorous baritone as Charles and he captures the extreme pragmatism born of decades of experience. Conor Walton is delightful as the preening peacock brother, the war-loving Lewis.

Director Garsson has made some terrific choices and some problematic ones. His casting of the leads is near perfect and he has coaxed musical performances from them that are first-rate. He has imbued the production with the irreverent tone that the piece demands...

On the other hand, his staging was static and lackluster including placing actors and crucial props (like the immolation platform and the talking head scene) where they could not be seen behind virtually opaque scrims…

Paul Reekie blended the voices together and led the band… his re-orchestrations sounded surprisingly full. Whether it’s in the score or Reekie’s idea, notice how the woodwinds play a bluesy klezmer-sounding passage anytime the characters invoke Jesus or Christianity in their bloody pursuit of warfare or power.

Small budget or not, Garsson and company (which just earned five Carbonell nominations)  have produced a fairly entertaining edition on its own terms that benefits from brio and gusto

From Bob Fosse’s original transformative direction-choreography to Diane Paulus’s current Broadway revival set inside a circus big top, Pippin has usually been a triumph of production over material.

Now comes Boca Raton Theatre Guild to serve up its version of this consciously anachronistic musical history of the son of Emperor Charlemagne. Whether by design or by the company’s resource limitations, the focus is on Stephen Schwartz’s eclectic score and Roger O. Hirson’s episodic book. They prove to be more than serviceable…

…Mike Westrich is an appealing, if naïve young royal, but the show belongs to Reggie Whitehead as the Player. He moves with rubber-limbed agility, sings commandingly and has charisma to burn. If his performance has a fault, it is its lack of foreshadowed menace early on.

Patti Gardner, Carbonell-nominated for the company’s Chicago last season, once again demonstrates her musical theater skill as Pippin’s scheming stepmother… Other standouts include Troy Stanley as the physically imposing king and Leah Sessa as a widow with child who is out to domesticate Pippin.

Otherwise, director Keith Garsson and especially choreographer Ron Hutchins have a challenge getting the ensemble to cohere. Hutchins seasons the production with some of Fosse’s signature pigeon-toed, hip-popping moves, while coming up with easier steps for the many untrained dancers in the cast.

Pippin is predicated on theater magic, which is hardly the Boca Raton Theatre Guild production’s strong suit, but the show is so likeable and the score so infectious that you might as well succumb to its — as one song puts it — simple joys.