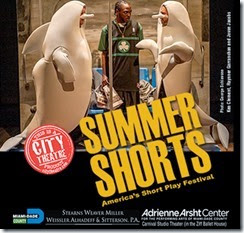 Thousands of theatre-lovers know that summer kicks off with the hilarious and provocative SUMMER SHORTS FESTIVAL, co-presented with the Adrienne Arsht Center. SUMMER SHORTS is America’s Short Play Festival, with an incredible line-up of scripts penned by the country’s best writers including City Theatre National Short Play Competition winners. SUMMER SHORTS is the most fun 90 minutes you’ll have all summer. This June it’s your turn to laugh your way into summer!

Many champions of the venerable Summer Shorts, even several of its leaders, have privately acknowledged over the years that the quality of the scripts selected and the ensuing productions have been frustratingly inconsistent… But over the past few years under the leadership of Producing Artistic Director John Manzelli and co-founder Susan Westfall, City Theatre’s concerted efforts have focused on boosting the consistent quality of the annual cornucopia of short plays… those efforts are paying off. This iteration of Summer Shorts is not only the most lushly and imaginatively produced with a noticeable extra bit of polish, but it simply is more consistently funny and entertaining than any edition in recent memory.

The most memorable to this playgoer has to be Tornado, a world premiere by Arlitia Jones, starring Tom Wahl and Mcley Lafrance and directed by Margaret M. Ledford. The non-comedy pieces in Summer Shorts often have been among the weaker entries. But in this case, the quiet tale of a man in a sportswear store buying a football outfit for his son is the outstanding piece of the night... What makes it work so well is Wahl’s committed performance under Ledford’s guidance whose joint work here I want to start lobbying to be at least nominated for the Silver Palms, Triple Crown, Carbonells, Golden Globes and Architectural Digest Design of the Year awards.

Shock and Awwww is a too-protracted goofball piece by Dan Castellaneta and Deb Lacusta (The Simpsons) in which two roommates are mind-controlled by their cat... It’s a spoofy nothing saved in part by a perfect match-up with the directorial sensibility of Paul Tei of Mad Cat Theatre Company. But Lafrance and David Perez-Ribada unabashedly invest their entire souls in this silliness

But the commitment to a professional no-excuses production extends to every aspect from Jodi Dellaventura’s sets to Ellis Tillman’s character-driven costumes to Matt Corey’s techno soundtrack to Preston Bircher’s infinitely variable lighting plots.

Ten little plays make up the 19th edition of Summer Shorts, and as usual, the programming is a mixture heavy on comedy but with just enough drama for those who crave meaning and emotional impact even in the shortest of plays.

This year’s batch includes world premieres, scripts from a pair of play-writing contests, and pieces first done elsewhere. Depending on the play, the writing is clever, funny, touching or not quite as tight and satisfying as the playwright imagines. While there aren’t any outright misses in the group, neither is the program loaded with brilliant examples of the short-play form at its most hilarious or moving.

Under the direction of Margaret M. Ledford, Paul Tei, Ricky J. Martinez and Manzelli, veteran Shorts actors Irene Adjan, Tom Wahl and Elizabeth Dimon deliver rock-solid performances alongside newcomers David Perez-Ribada, Niki Fridh, Mcley Lafrance and Mary Sansone. No one in the company indulges in scene-stealing shenanigans; instead, the seven pros serve up varied characters, accents and attitudes appropriate to each piece. Costume designer Ellis Tillman gives the actors a huge assist with an array of outfits that communicate class, character and style before the first line is uttered.

Overall? The 19th Summer Shorts is short on standouts but long on journeyman work.

City Theatre has made the short play format its life’s blood and has pretty much become the "go to" for short play fests with its Shorts Gone Wild, and the annual Summer Shorts — America’s Short Play Festival.  So, while I usually act like a long-form snob when it comes to short play fests, City Theatre’s Summer Shorts 2014 gives a good sampling of what can be accomplished on stage in a short amount of time.

This year, they present the plays as a sort of fashion collection... Each play is introduced with a fashion-show type voiceover, with each getting a named collection (who is that voiceover, she’s wonderful!). Mannequins and runway "dancers" adorn the stage. In between plays, while set pieces are being changed, dancers create tableaus. It’s a bit of stretch and doesn’t tie the plays together, but it is fun, kitschy and very South –Beach-y.

Old Flame, by Mira Gibson, directed by Margaret M. Ledford... Fridh and Perez-Ribada have good chemistry and Mary Sansone, who rolls into the grocery store on skates, is utterly daffy as Sophia the young girlfriend.

Halftime, by Richard Dresser, directed by John Manzelli and Mcley Lafrance... It’s a 10-minute monologue and Lafrance nails it.

Shock and Awww, by Dan Castellanta and Deb Lacusta, directed by Paul Tei... Perez-Ribada and Lafrance play it sophomoric, probably moreso even than the material calls for.

The Scottish Play, by Theo Reyna, directed by Tei... Dimon and Wahl show off their veteran talents in this one, and the play seems to have become a bit more polished since I saw it as part of Mad Cat’s Mixtape 2.

My Husband, by Paul Rudnick, directed by Ricky J. Martinez… Irene Adjan is sheer perfection as the doting mother, Gabrielle.

It’s a pumped up affair this year, the nineteenth season for City, with blasting undefinable music, cute young dancers in strip club poses, (vogueing perhaps?) a rehearsal of something or other that included a whirling Asian sword dancer and a howling MC, who thankfully, as the last of the audience entered, announced that this bit was not up to performance standard and would not be included in the show. Thank you God.

Summer Shorts opened finally with a sultry female fashion show voice announcing that Mira Gibson’s Old Flame (as predictable as its title suggests) would be the first presentation. Okaaaay.

Then the dancers returned, more torso thrusting, for the scene change.

Apparently Roger didn't care for the scene changes, as he mentions the dancing and "strip club posturing" several times.

And to cheer you up after all the tears, another hit of the evening: Make John Patrick Stanley Go Home by Holli Harms. Irene Adjan, Elizabeth Dimon and Niki Fridh simply rock the joint. Adjan and Dimon enter, stand still, and they’re brilliant. These two should team permanently for comedy fame and fortune.

And at last, a piece worthy of inclusion in a short play festival: John Minigan’s It’s the Jews... Well written and with hilarious performances from Dimon and Perez-Rabada.

Theo Reyna’s clever piece The Scottish Play is a good opener for the second act.

The best written play of the evening, Paul Rudnick’s My Husband gets laugh after laugh for Irene Adjan and David Perez-Rabada. A funny script and brilliant comedy from the two actors.

Tornado, a weeper by Arlitia Jones, has Tom Wahl at his very best as a father buying sports gear for his son.