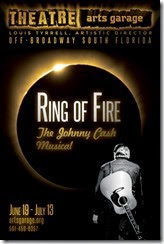 The Theatre at Arts Garage opened its production of Ring of Fire on June 19, 2014.

From the iconic songbook of Johnny Cash comes this unique musical about love and faith, struggle and success, rowdiness and redemption, and home and family. From the opening chords of vintage Country to Rockabilly, Rock n’ Roll, searing ballads and gentle songs of love and deep faith, Ring of Fire packs a score that provides a rich fabric in which to lay down the story of Johnny Cash. The great bio-pic “Walk the Line” told the story of the events of Cash’s life and the incredible struggles and triumphs of his life. Ring of Fire gives the music the spotlight, as a core group of talented actor/musicians celebrate the songs that are such a part of our collective experience.  Johnny Cash's Ring of Fire will both move and exhilarate.

This music-heavy tableau, now on stage at the Theatre at Arts Garage in Delray Beach, offers more depth than what its title may imply. For those expecting a traditional musical, advice would be to give up the notion before walking in the door. You’ll have a better experience if you allow yourself to be swept away in each moment (and there are many moments) to truly appreciate it.

All of the actors/musicians are multi-talented, each showing their flexibility, mostly on guitars, but sometimes on bass, sometimes on washboard, sometimes moving from keyboard to drums.

The popular A Boy Named Sue about a now-grown man who goes looking for his father to even the score for being given a girl’s name is a highlight. This is where Sherry Lutken’s direction excels as seen throughout, with choreography and staging that serves to accentuate the song-stories. Here, Sherwood is the boy named Sue and Friedman is the father who left after bestowing the unfortunate moniker. The on stage barroom brawl looks spontaneous but it’s the nifty fight choreography that makes this such a crowd pleaser.

David Lutken soars in his interpretation of the lonely lament of Sunday Morning Coming Down, a song written by Kris Kristofferson, but which Cash made into a No. 1 hit.

Friedman gets the spotlight for Man in Black, two times actually with a Part 1 and Part II, but his approach lacks the strength that the complex song requires. He’s much stronger when paired with Russell, who shines in the lovely duet that will always remain a Johnny Cash-June Carter  treasure, Far Side Banks of Jordan. And he has a good ‘ol time with the farmer’s alley oop Look at Them Beans. Duchow stands out in her primary task as fiddler, capturing the Southern old-time fiddling style with detailed precision.

The production values here amp up the appeal. Richard Cromwell’s sturdy set captures the feel of a Southern backyard with its wooden fence... Michael Kelly’s sound, with its train rolling down the track and other ambient noise, creates atmosphere, and Larry Bauman’s costumes, from farm hand to flounce to prison wear, are a comfortable mix that are overstated when necessary (the Opry) and otherwise perfectly suited to complement the overall Americana tone.

That seems to be the best way to describe “Ring of Fire: The Johnny Cash Musical” at Arts Garage in Delray Beach through July 13.  Despite the title, “Ring of Fire” is not as much about Johnny Cash the man as it is about the great American music he loved.

“Ring of Fire” is performed by a cast of three women and five men, performing in couples, en masse and separately. Each performer is a multi-instrumentalist and singer. Watching performers switch instruments is part of the charm of this show.

The versatility of the musician-singers is dazzling. I have not seen such a concentration of talent live onstage in many years. “Ring of Fire” is a joy to behold even if you don’t give a fig about Johnny Cash.

Even those who are not well versed in Cash’s music can find a way to connect with each song and scene. The most jaded country music critic can’t help but fall in love with the legend that is Johnny Cash… The cast members are talented beyond belief, each playing multiple instruments and with singing voices that don’t hit a false note.

The Theatre at Arts Garage production of Ring of Fireplays through July 13, 2014.  Many dates are already sold out as of this posting.