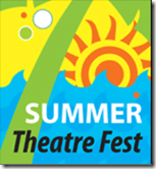 Actually, Monday’s aren’t so dark in the summer; the South Florida Theatre League  brings you Summer Theatre Fest, a series of free play readings hosted at member theaters across South Florida. They occur every Monday night through the end of August.

Tonight’s entry is Lost Portraits, by Kenneth Kurtz.  It will be presented by the Miami Acting Company  at the Hibiscus Room at Pinecrest Gardens at 7:30 pm.  Event information can be found HERE.

Memories Make Us Who We Are
Huffington Post lists the 21 signs that you went to a performing arts camp, an appropriate article as summer theatre camps start today all across South Florida.  Check with a theatre company near you if you’re still looking to keep your child busy this summer.  It could save the world, according to Lauren Gunderson.

What’s In A Name?
The Miami Herald reports that Adrienne Arsht Center for the Performing Arts will be naming the stage in its Carnival Studio Theater after a local playwright. it’s now home to the Susan Westfall Playwrights Stage.  It’s a fitting tribute, especially as Westfall was co-founder of City Theatre, which has been based out of the Carnival Studio for quite a while.  Not coincidentally, the name change becomes official on the opening night of City Theatre’ s Summer Shorts on Saturday.

Also in the article:  GableStage is hosting a reading of The Shop On Main Street tonight, and Palm Beach DramaWorks will be staging a concert version of Zorba! June 19th through 29th.

Only Because They Stuck with CITIES.
PolyMic lists 17 cities that aren’t NYC or London that have amazing theatre scenes.  Metro South Florida isn’t, technically, a city, so we’re not on the list.

South Florida’s Next Export To Broadway?
The Miami Herald reports that Gloria and Emilio Estefan are working on a biographical musical that they hope to take to Broadway.

On Your Feet! — a musical about their lives and the music that made them famous — is being readied over the next year. It’s headed for a tryout run in Chicago in the summer of 2015 and, if all goes well, for Broadway that fall.

So why aren’t they working on it in South Florida?  Is this a slap in the face to the talent in the Estefan’s own home town?  No, it’s marketing.

“Chicago is a good demographic for New York. You can’t try it out in Miami, because you wouldn’t learn anything,” (playwright Alexander Dinelaris) says. “Miami’s real home cooking for On Your Feet!”

While that is a good point, we still don’t know why you wouldn’t assemble it in Miami - where you can get the talent steeped in the real traditions - and THEN take it to Chicago.  Just sayin’.
Winners
The Palm Beach Daily News fills us in on the sixth annual Randolph A. Frank Prize for the Performing Arts.

The Frank Prizes recognize performing artists and teachers who work in Palm Beach County and contribute significantly to the community’s cultural life. The evening was underwritten by Nancy and Jay Parker.

This year’s honorees are Nanique Gheridian, company manager of Palm Beach Dramaworks, and Jan Hanniford, dean of dance at Dreyfoos  School of the Arts.
Meanwhile…
..in Coconut Grove, the wheels are turning to re-create a Coconut Grove Playhouse.  Florida Theater On Stage reports on the five year outlook.

A rough estimated schedule for the project on the county’s website called “milestones” cites construction beginning Oct. 1, 2017 and it estimates that work will finish Sept. 30, 2019, although that likely includes a period when the building is open but touchups and minor changes are being made.

Here's hoping it moves along swiftly!
Posted by C.L.J.