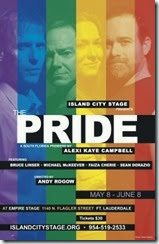 Island City Stage opened its production of The Pride at Empire Stage on May 22, 2014.

It is 1958. Philip is married to Sylvia, who is illustrating Oliver’s most recent children’s book. There is a frisson between Philip and Oliver when they first meet as they skirt around what cannot be explicitly said.

It is 2008. Fed up with his inscrutable infidelity, Philip leaves Oliver, alone and drowning his sorrows in role-play and scotch. Oliver enlists Sylvia, who introduced them, to counteract his loneliness.

Alternating between 1958 and 2008, The Pride examines changing attitudes to sexuality and the perennial themes of love, lust and betrayal.

The intimacy of Island City Stage’s production of The Pride inside the Empire Stage space adds an extra layer of closeness to an absolutely enthralling production. Pair this with artistic director Andy Rogow’s sensitive and seamless direction, along with his selection of actors who know how to inhabit roles and not merely play them, and Alexi Kaye Campbell’s British drama bursts at the seams with courage.

McKeever’s deep understanding of Oliver’s worlds, both in the 1950s and in the character’s modern incarnation, makes his characterizations utterly flawless.

Linser plays Philip close to the vest, yet as buttoned up as the character seems, Linser is able to convey the sexual tension and Philip’s struggle to quell his desires.

Cherie, as the troubled Sylvia in the past era and the bold Sylvia in the present, perhaps has the most difficult role... The character comes off as a supporting player merely there to assuage the dilemmas of the two men… Whether it is the fault of this production and its direction, or a problem in Campbell’s script, is difficult to decipher.

Dorazio offers comic relief in his supporting role and he knows enough not to overplay it so as not to dilute the play’s seriousness.

Perhaps what serves as the overarching perfection in this production is Rogow’s direction. His vision is masterful in a play that calls for a lot of nuance. He nails it as he weaves his characters in and out of eras. When an early era character needs to enter a later era scene and vice versa, the lighting, costumes and direction make it seem ghostly, never disturbing the action, but enhancing it. It is a beautiful, artistic rendering.

The script time travels repeatedly, so that an actor exits a ‘50s scene and re-enters as his or her 2008 namesake. Sounds confusing, but director Andy Rogow, the transformative actors, costume designer Peter A. Lovello and set designer Michael McClain keep the era of each scene quite clear.

Adopting British accents, the actors artfully delineate their different characters. McKeever’s ‘50s Oliver is a sensitive soul who longs to live an open, authentic life; present-day Oliver is a witty mess. Linser’s first Philip exudes barely controlled rage, while his present-day Philip is a decent and wounded man. Cherie is simply haunting as Philip’s lonely wife; as the contemporary Sylvia, she’s cheeky and wise. Dorazio is impressive in all three of his supporting roles, as the not-so-menacing Nazi, a chilling doctor and a garrulous magazine editor with a wrenching story to share.

The Pride rotates its scenes between… two periods, with Michael McClain's clever and economic living-room scenic design distinguishing the two by switching out a typewriter with a laptop and vice versa…  while certainly well-meaning, it is also verbose, stuffed to the brim with thickets of unnecessary dialogue. It doesn't help that Andy Rogow's direction too often teeters toward soap opera artifice, with characters declaring their thoughts while staring archly into the distance rather than at each other.

The acting is solid and impassioned across the board, with McKeever and Cherie its most moving and naturalistic performers; their shared moment on a park bench is the show's highlight.

Linser has a tougher go, saddled with playing a character who is, in the 1958 scenes, repressed and stiff. His emotions go from buried to volcanic, with little middle ground, and in the 2008 segments, he lacks enough stage time to accrue dimension.

There's enough prestige in this production to compensate for what sometimes feels like a long-winded after-school special that artfully tells us what we already know. Rogow's most masterly touch is his decision to bleed the chronologically disparate scenes together: He frequently grafts characters from the beginning of the next scene onto the end of the previous one, creating thematic fluidity and suggesting that, half a century removed, these perennially struggling lovers still haunt the spaces, and indeed the psyches, of their counterparts.

There’s powerful acting at Island City Stage. The Pride, which opened in London in 2008 to acclaim, is being presented by Island City Stage and actors Faiza Cherie, Sean Dorazio, Bruce Linser and Michael McKeever do well with an awkward script.

Although there are many gay one liners this is by no means a farce. These characters are in pain and director Andy Rogow has drawn deeply moving revelations from his actors. McKeever, in particular, digs deeper than most would care to go. Extraordinary moments.

The Pride is well worth attending, but be warned. It’s confusing and program notes are of no help. Do your homework first.

Kathryn Ryan reviewed for The Edge:

Like a black and white movie, the monochromatic set and costumes in shades of grey are the perfect accompaniment to Aleki Kaye Campbell’s play, "The Pride," which vacillates between the 1958 and 2008. The visual metaphor works on a couple of levels. First, it emphasizes the very black and white attitudes prevalent in the late fifties and early sixties regarding homosexuality as explored in films like "A Single Man" with Colin Firth.

Director Andy Rogow’s seamless transitional devices between the two periods are also clever. The play and its characters move liquidly back and forth from each decade, telling two stories in juxtaposition to one another. Rogow uses simple, yet genius, methods to indicate the change in time period.

Peter Lovello’s costumes are dead on... Care and attention here is evident and welcome.

The acting is uniformly strong. The three main characters are in a love triangle reminiscent of the characters in Harold Pinter’s play "Betrayal."  As Sylvia, Faiza Cherie… is very moving in the scene at a park where she reveals her knowledge of the affair between her husband, Philip, and her employer, Oliver. She also plays Oliver’s best friend, a la Grace Adler of "Will and Grace" fame, with conviction.

…Michael McKeever as Oliver again delivers a fine performance as both an author of children’s books in the 1950’s and a sex addict and journalistic bel-esprit in 2008.

Bruce Linser must also flip characterizations between decades. In one he is a self-loathing beast and the other a gentle man seeking monogamy. His depression is real and his disappointment apparent. In one scene he uses the pillow as a barrier between him and his former lover; this action of self-protection reads well.

Astute direction, fine production values and terrific acting make it worth the trip to see "The Pride" at Empire Stage.

Don’t be fooled by the smallish and threadbare set at the snug Empire Stage black-box theater in Fort Lauderdale. The story by Alexi Kaye Campbell is rich, and it’s expertly told by director Andy Rogow. The dialogue is tight, the pacing is taut and the structure is tidy.

the walk-on roles of the call boy, a magazine editor and a psychiatrist are played by Sean Dorazio. He, along with McKeever and Linser, is a formidable talent, carving out separate personas for each role, but leaving a wisp of a smoky connection lingering in the air between scenes and time shifts.

But it is Cherie who is magic and … and … I guess … noble. She hardly seems to be acting at all, but something closer to splicing atomic-level sense memory with Buddhist/Hindu reincarnation.

Island City Stage presents its production of The Pride at Empire Stage through June 22, 2014