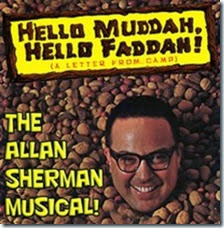 Inspired by the Grammy Award winning song "Hello Muddah, Hello Fadduh!" and Allan Sherman's eight record albums, hilarious song parodies are woven into a merry musical about the life of Barry Bockman and his beloved, Sarah Jackman. From birth to summer at Camp Granada, to marriage, to suburbia and the shopping mall, to retirement in Florida, the audience is treated to a zany cast of characters.

What needs to be said first is that director Dan Kelley and five talented singer-actors — James Park as Barry Bockman, Eva Marie Mastrangelo as Sarah Jackman, and Ryan Halsaver, Sarah Sirota and Shane R. Tanner in multiple roles — give the show as decent a production as it’s likely to get.

What needs to be said second is that unless parody songs about a nice Jewish guy’s journey from birth to old age leave you convulsed with laughter, Hello Muddah, Hello Faddah may not be for you.

Under David Nagy’s musical direction, the performers blend beautifully and shine on their solos. Colleen O’Connell’s clever costumes are of a piece with the tone of the show, deliberately amusing and sometimes over-the-top tacky (on purpose).

“Hello Muddah, hello faddah; here I am at Camp Grenada.” The musical based on the name of Allan Sherman and Lou Busch’s 1963 novelty tune is about as silly as the song it’s based on.  Yet despite its almost two hours of one-liners, caricatures and Borscht Belt humor, the current show at Broward Stage Door, in all its campiness, is energetically enjoyable… You’ll laugh, you’ll cry comic tears, you’ll leave the theater salivating for anything on rye from a Kosher deli.

Director Dan Kelley knows exactly how to pace his actors in their handling of  the comic lyricist’s quick turns of phrases, and how to punch up the many musings on modern Jewish culture. With so many scenes and multiple characters coming in and out, Kelley keeps what could be mass chaos into a funfest of controlled frenzy.

The cast, especially the secondary characters, are called upon to play multiple roles... Tanner is the standout, especially in his role as the over confident Uncle Phil, everyone’s annoying relative, who returns to haunt even after his death. Halsaver seems less confident as the stuttering teacher, Mr.Kalodner, but really cuts loose dressed in drag as a female department store shopper hunting for bargains. He’s also completely comically engaging as a man who actually encourages his wife to get bigger by the minute in the very funny Grow, Mrs. Goldfarb.

Sirota has to wear multiple hats (literally) and manages to create female characters that each have their own signature – a difficult task with the roles she’s given, which could, the way they are written, all end up sounding and looking the same.

But it’s Parks and Mastrangelo who are so wonderfully honest in their portrayals of Barry and Sarah that you really care how their lives end up. The two create characters that actually take shape from beginning to end.

Musical director David Nagy… gets credit for ensuring the cast maneuvers Sherman’s multiple and sometimes difficult lyrics. Kudos, too, to Colleen O’Connell’s many costumes that have to cover the decades, and Ardean Landhuis’s lighting, which also helps with the moods of the settings and time periods.

Rod Stafford Hagwood was there for The Sun-Sentinel Stunned Senseless:

The slap-shtick panache of sight gags and wordplay would be comfortable onstage in the Catskills, and much of it works here, particularly with a cast and three-piece band giving it everything they got. Think “Weird Al” Yankovic, but not as mean.

To their credit, the (secondary) cast members sing with gusto and hit the punch lines as hard as they can. Sarah Sirota, Shane R. Tanner and Ryan Halsaver all play various characters, and play them with enough energy to power another musical with the afterburn alone.

Hello Muddah, Hello Faddah! is a cute show with performers mining the most out of familiar melodies. It isn’t more than that, nor should it be.

The show is packed with many good performances. The songs are all pretty funny, and while some are dated, they still have comic punch. The five cast members — Ryan Halsaver, Eva Marie Mastrangelo, James Parks, Sarah Sirota and Shane R. Tanner — are excellent vocalists who combine for some striking harmony. They slip easily into the silliness that was Sherman’s strong suit. During the show, those five performers morph into 40 characters and make 60 costume changes — a daunting task in itself.

A big guy with a big talent, Tanner sings, acts and hustles, taking on 10 roles. He is particularly stunning as Uncle Phil, whose crazed stand-up comedy shtick is hilarious and as Mr. Bloom with an ode to his astronaut son who has landed on the moon.

Dan Kelley does double duty as director and choreographer, keeping the on-stage chaos to a minimum. He works beside Colleen O’Connell who has come up with a raft of colorful, often off-beat costumes.