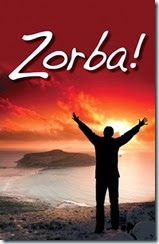 Palm Beach Dramaworks opened its concert version of the musical Zorba! on June 20, 2014.

Zorba the Greek shares his joyous philosophy of life with Nikos, a young American student, as they each navigate love, romance, and heartbreak. The spirited score includes "Life Is," "The Butterfly," and "Only Love."

Full-length concert presentations include both the book and the score, and are performed with limited instrumental accompaniment, and minimal staging and design.

This edition, helmed by Clive Cholerton and starring Broadway vet William Parry as Zorba and local Nick Duckart as his mentee Nikos, fairly throbs most of the time with an infectious zest for life.

Even stripped down, Dramaworks’ offering is often a passionate and pungent experience delivering a show that few audiences other than theater geeks know well.

Parry was fortuitous casting…. He brings a warm seductive baritone that wraps around the audience. His Zorba exudes the brio of a character who sucks the marrow out of life with a satisfying sigh. Without ever echoing Quinn, Parry creates his own iconic prole of an Everyman with voracious appetites and an infectious vivacity.

The rest of cast, most familiar names from the region, throw themselves into the material completely, especially Duckart, Hodos, Turnbull and Amadeo. But credit is due to the ensemble including Ken Clement, Roland Rusinek, Josh Lerner, Elizabeth Sackett, Cassandra Zepeda, Jim Ballard, Jose Luaces, Alyssa Fantel, Josh Stoughton and Bell.

Frankly, you will likely never see Zorba! again with artists of this quality. A rumored Broadway revival with Antonio Banderas has floated into the ether. The expense and logistics of the show are too overwhelming for a full-fledged production, since even the title has insufficient name recognition except to Boomers and their parents.

So savor this Zorba! while you can.

Thanks to Palm Beach Dramaworks, this neglected gem of a show is produced as a concert musical, in which the focus is squarely on the text and music and how they alone propel the story. In its purest form, this concert presentation features a bare stage, a piano, and actors with scripts seated or standing at music stands.

In streamlining the script to just under two hours, Cholerton also has hit on a wonderful narrative device to drive the storytelling. A voiceless character, a dancer (Lindsay Bell, who is also the production’s talented choreographer) guides Nikos and the audience through the chronological and emotional journey of the story. In less capable hands, this approach could be waterlogged in movement clichés, but Bell imbues this assignment with emotional intention and nuance.

This is more than a good story well-told. This Zorba! is a first-class ensemble piece beautifully sung and dynamically performed by a committed cast. They bring conviction, generosity and outstanding attention to character detail. In a concert staging, this tall order is achieved with apparent ease.

The Palm Beach Dramaworks presents the concert version of the musical Zorba! through June 29, 2014.