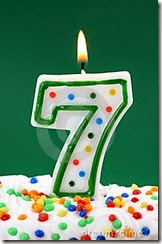 The South Florida Theatre Scene launched on this day in 2007.  The first post didn’t really tell anyone much about theatre, and it proposed a model for this blog that was largely unworkable.   It really took over a year year before we knew what we were doing.   And here we are, post #1806

The first edition of THE SCENE appeared on January 4, 2008.   There have been 262 editions of The Scene since then.

In those early versions of The Scene, we began including snippets of reviews, but we didn’t track them from week to week.  So on January 31, 2009, we started creating review round-ups for each show.  At first, we tended just to link to the review, but soon learned that reviews on newspaper websites eventually disappear.  So we began to quote samples of the review as well, so that even if the review were taken off of a website, you could still get the gist of it.  We have published 551 review summaries as of this posting.

Our most-read article is 2009’s Art, Self-Imposed Limits, and the Age of Niche Theatre.  We don’t know why.  It’s not really that great an article, and the title is kind of high-falutin’ and self-important.

We’ve fallen off a bit the last few months, the intrusion of full-time occupation and a other distractions.  But we’re still here, and we’re planning on going on for another 7 years.

And here’s a song, a celebration of seven for your inner seven-year-old.

Email ThisBlogThis!Share to TwitterShare to FacebookShare to Pinterest
Labels: Admin